So, I, like thousands of other like-minded people have decided to start a blog to record my running journey. Not for self gratification (Ok, that maybe a small part of it) but hopefully so that one day my kids will read this and be inspired to do something similar.  7 years ago I could barely run to the bus stop, climb stairs without being out of breath or had any set challenges outside of the family home - which trust me, with 3 young boys (7, 4 and 2 at the time of writing this) they create their own challenges!

I started running in 2012. I had played football since I could pretty much walk but retired at the graceful age of 32 due to reoccurring ankle, back and leg injuries (you name it, I had it which I'd put it down as a sign of getting old!). From there I got married, had a couple of kids and with a happy life, the weight started to pile on. My father passed away at an early age and the warning signs were there. I wanted to do something about it and running seemed a viable option...

It started with short laps around Bromsgrove, a mile first followed by a couple of miles soon after. It was a walk/run routine which slowly resulted in more running than walking.  Eventually I stumbled upon parkrun in August, 2014 and got myself round in a respectable time of 30:46. I soon got addicted and the competitive nature set in, wanting to beat my previous time as so many others tend to do - PB's are a reward for all the hard work after all, aren't they?!?

Fast forward 7 years and I've run numerous 10k's, Half Marathons, Marathons and an Ultra Marathon. I joined Kings Heath Running Club in 2015 which helped massively, both physically and socially.  I'll never be the fastest, I'm a mid table runner but it's my passion, something that keeps me sane and relatively fit!  This blog isn't about those races though or previous achievements, it is to record and document my next serious challenge, something at the time of writing I still don't know whether I can achieve but I welcome  the challenge. It's what gets me through the boring 4-5 mile runs around the quiet streets in the early hours or late night runs to clock up the miles.

I've entered the Lakes in a Day ultra marathon in October, 2019. My training plan started a week before my 40th Birthday and I'm under no illusion that this will be my hardest challenge to date. 50 miles, 4000 metres (13,400 feet of elevation) of self navigation between Caldbeck at the top of the Lake District and Cartmel at the Southern point.  One line, straight down the middle of the Lake District. Sounds fun, right?


50 miles, 4000m ascent – a journey on foot from the very top of the Lake District at Caldbeck to the very bottom, at Cartmel, via the stunning Helvellyn Ridge and the western shoreline of Lake Windermere. It might not be the easiest traverse but it will be the most spectacular!


It will be a day never to be forgotten.

- taken from the official Lakes in a Day website 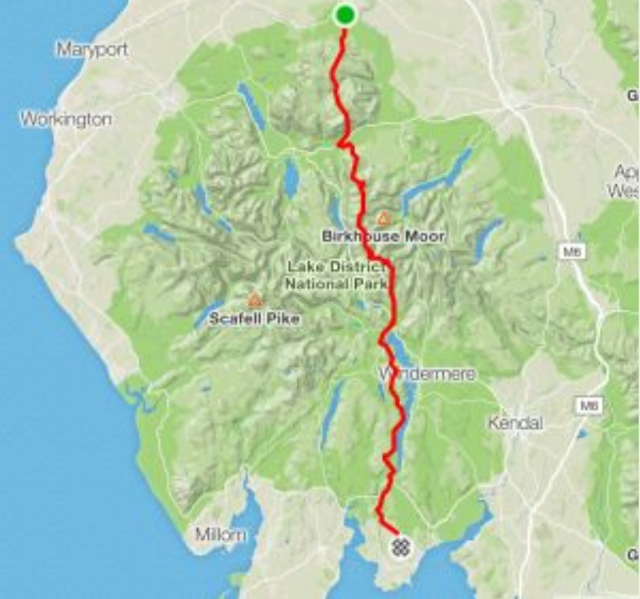