Due to a late cancellation, I managed to get a consultation with the physio on Monday afternoon, a week after sending them the self referral form. I have to say, I have used the Princess of Wales Physiotherapy Outpatient Department numerous times and the service has always been second to none. On each occasion I've seen a different physio but they've all been professional, understanding and realistic in their assessment and recovery plan.

On this occasion I met with George and after the obligatory set of Q&A's, he did an assessment of the ankle, bending it every way possible - geez it hurt! The swelling had reduced by this point but the bruising had come out in my foot, shin and calf. Although I was weight bearing (mainly on my heel which could potentially cause issues elsewhere) I had very little mobility in the ankle but he was confident this would improve over the coming weeks. In short, {disclaimer - this is a personal exercise program so I'm not advocating this works for any other injury} I was advised to continue to ice the ankle, up to fifteen minutes three times a day, elevate and gently work the ankle to improve mobility. Short, low reps to start with, increasing as mobility improves and gently massaging the area if any swelling developed.  I was also encouraged to foam roll my calf's, thighs, hamstring and IT band to loosen up any stiff muscles - note to self: dust off the foam roller from the back of the wardrobe!

I was given a follow up appointment in two weeks and told as a guideline that I should be able to commence gentle running on flat terrain in as little as 3 weeks (hooray) but would require physio to build up the ankle for anything up to 3 months - dependant upon the healing process. 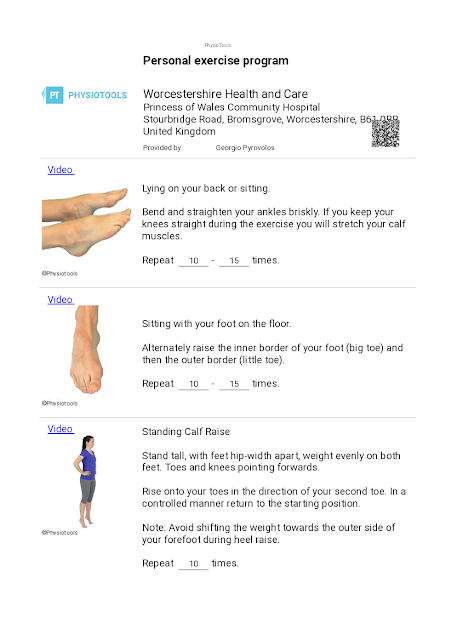 In terms of LiaD, and the nature of the terrain and elevation, I was advised to stay off the trails for at least 8 weeks, which meant no more Malvern or Lickey Hills runs in the interim.  Referring to my training plan, this meant that all training runs up to week 13 (build phase) would involve no trails, not ideal but doable. I'd have to embrace the roads! It also meant that I'd have to cancel the scheduled two week rest break at the end of August for the family holiday to the Isle of Wight - a conversation I wasn't looking forward to having with the wife! It looks like I'll be packing the running gear after-all...

It also put the Teesdale Way trail run in jeopardy in August (week 11), something Ian and I had organised as a training run prior to LiaD.  The Teesdale Way, a 92 mile trail alongside the banks of the river Tees, passing over the remote high moorlands of Cumbria and Durham, then dropping to the industrial landscapes of Teesdale and the coast. This wasn't part of an organised race as such, (although the LDWA do an annual event) but more of an adventure and to practice time on feet. We'd planned to run the 92 miles over three days - Friday through to Sunday - with support/transport from Naomi, my sister-in-law; picking us up at the end of the day before dropping us off from the same point the following morning until we'd covered the full 92 miles and reached the sea.

I had agreed with work that I'd spend another week working from home. Due to the nature of the injury and the fact that I wasn't 100% weight bearing, I was uninsured to drive and being a Business Development Manager covering a sales area from the Midlands down to Cornwall, driving is a fundamental part of my role. This wasn't ideal but there were plenty of projects, emails, phone calls, and reports that kept me busy. This also aided my recovery as I continued to ice and elevate my foot from the comfort of my home office.

In a bid to maintain fitness, I was encouraged to start swimming with immediate effect but to hold off cycling for at least 10 days.  I'd agreed to borrow a friends Turbo Trainer so I could get some miles in on the bike before work each morning but again, I'll put this on hold until next week - the physio knows best!

As cycling wasn't an option, I went swimming on Tuesday and Thursday, managing to do 1000 metres in just under 45 minutes and 39 minutes respectively, all in breaststroke. (Not sure where Garmin got the extra 25 metres from on Thursday though, I definitely started and finished at the same end of the pool).  I soon realised that the downside of swimming, or at least the way I swim, was that my shoulders and neck have never taken such a beating; I never ache this month after a long run! There's definitely an incentive to a) improve my technique and b) mix up the strokes if it's something I want to continue long term - which I'm not sure I do to be honest.  Now, don't get me wrong, I enjoy swimming but find it difficult, it's the whole breathing thing. If I could swim widths and breath at either end I'd enjoy it a whole lot more, although I'm fully aware this isn't how normal swimmers operate. It also reconfirmed that my decision to rule out an ironman was indeed, the correct one. 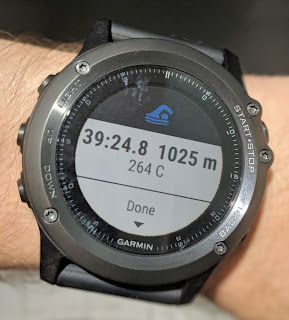 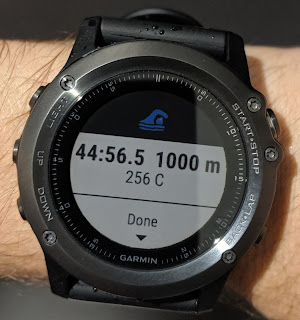 I continued to rest and ice the ankle as much as possible and did the physio exercises daily; starting with ten reps of each, moving up to 15 reps by the end of the week. I soon noticed a vast improvement in mobility and was fully weight bearing by the weekend - which was great news.  The foam roller also made a few appearances which was as excruciating as I'd remembered it to be, there is definitely a love/hate relationship between us!

For Fathers Day the boys had got me a couple of medal hangers which I eventually got round to hanging up and displaying in my office. I'd already had two, bought for me back in 2016 when running was relatively new but these were now overflowing and as a result I'd started to have a collection in my sock drawer. I wasn't a big fan of displaying medals at first but the kids love them. James, my eldest (7), has done a couple of fun runs and his medals are hung proudly in his bedroom so if he can celebrate his achievements in this way, then so should I! 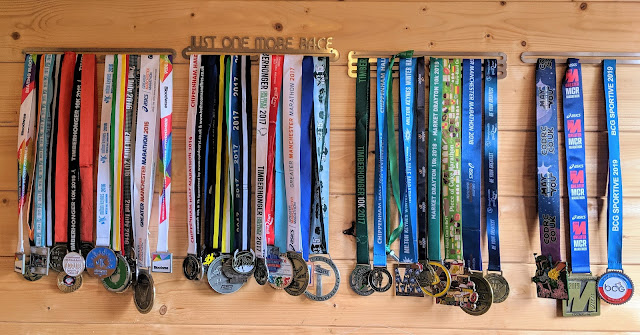 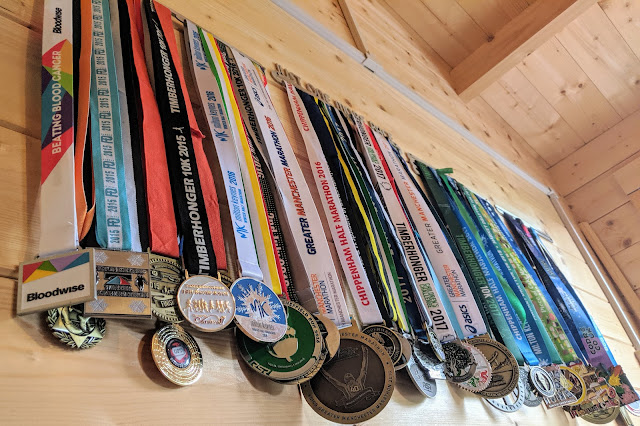