Turbo Training and Swimming in Circles

I finally got the all clear to drive and returned back to work on Monday. I'd been confined to the home office for the past two weeks and it was a relief to get out of the office, visit some customers and not be stuck behind a desk. I had cancelled a three-day work trip in Wales in favour of seeing some local customers, keeping the commutes to a minimum and continued to ice my ankle at the end of the day - something the physio had recommended after any lengthy period of time on foot.  The ankle itself felt fine, although it felt slightly weird putting on a pair of work shoes for the first time after living in flip-flops for the past two weeks.  I continued with the exercises, 15-20 reps of each and there were definite signs of improvement as the week progressed although I still didn't have full mobility.

I miss running, I won't lie. I'd kept up-to-date on Strava and the club's Facebook page and enjoyed reading about other people's achievements and race reports, albeit disappointed that I wasn't involved. It's only been three weeks but it feels longer. I'd spent some time researching potential races, both local or further afield and came up with a few ideas for later this year and into 2020. I booked the Isle of Wight Half Marathon for August (well, it seemed pointless taking my running gear and not entering the local race whilst I was there!). I'd also pencilled in the following races although I won't commit to registering until I've got LiaD out of the way first...

Sunrise to Sunset Challenge - to run as far as you can in 15 hours - throughout the night. It's been on the radar for a couple of years but has always clashed with other events.

Milton Keynes Winter Half Marathon - a race I do every year as I have family who live in Milton Keynes. Its billed as the last half marathon of the year and it coincides with the annual 'xmas present swap' whilst we see the family. It was made extra special last year as I ran with my wife (*her first Half Marathon!!!) and sister-in-law.

Icing on the Cake Marathon - and a return to the Shropshire Hills - Carding Mill Valley in particular. It was cancelled last year due to adverse weather conditions but there is always snow on the hills adding to its charm.

Ashby 20 - one of the first races in the diary every year. 20 undulating country miles, an awesome hoodie and a cheese cob! Perfect last run before a Spring Marathon.

Manchester Marathon - OK, this will be my 5th time but it always falls on the weekend of a trade show in Harrogate I attend for work. I'm half way there. I'm travelling North - it seems pointless not too...

Sea to Summit Ultra - I came across this whilst flicking through Facebook. 32 miles along the Offas Dyke footpath on the English/Welsh border. Sounds amazing!

Midnight Mountain Marathon - Starting at 17.30 and finishing at midnight, armed with a head torch running up the Brecon Beacons...sounds like my kind of race.

The Lap Ultra - something I had considered for this year as a warm-up for the LiaD but logistically it just didn't work. 45 miles around Lake Windermere in the Lake District.

I also took advantage of a free book a friend was giving away as she'd ordered it twice; 'Eat & Run - my unlikely journey to Ultramarathon Greatness by Scott Jurek. I don't get chance to read as much as I would like to but one of the positives of being injured is that I suddenly have a lot more spare time on my hands - so thanks Kate. I look forward to reading it and will make sure I pass it on to somebody else once I'm done. 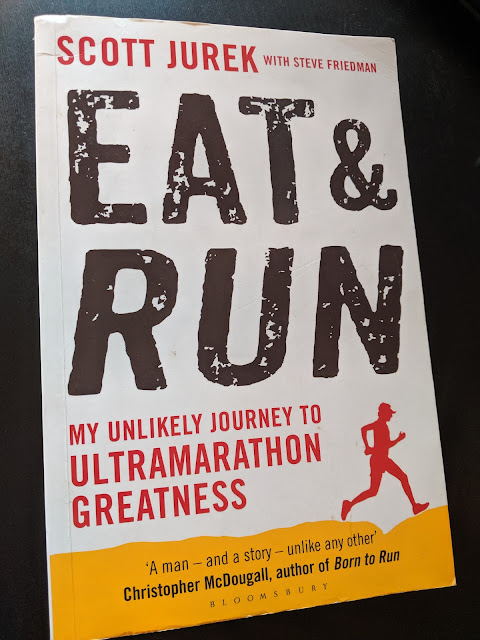 On Monday, I managed to fit in another swim session, 1200 metres in just shy of 43 minutes - slightly further and faster than my previous efforts but just as tiring and unflattering.  What I have noticed about swimming is that, similar to running I suppose, there are times when I just switch off, get my head down (quite literally in this case), get into the zone and just get it done. I suppose it can be compared to your commute to work, you remember getting in the car but have no idea how you got there or the actual journey itself, you just go into autopilot. I have that same feeling with swimming, I remember getting in the water, maybe checking my watch occasionally for a distance update, then before I know it, I'm done and in the shower. I know I ache afterwards. I know I worry about swimming etiquette or holding people up, or not being as graceful as other swimmers but I very rarely remember any of the details. I'm happy that I've got it done but I can't honestly say I enjoy it.  Running for me is so much more rewarding.  What I have realised however, is that my O.C.D really kicks in when I'm swimming; so much so that on the past three occasions I've used the same locker, same changing cubicle, swam in the same lane and used the same shower - something I've only really thought about today.

I took Tuesday as a rest day but managed to fit in 20 minutes of core strength exercises - 'the dozen' - something I found on-line and had dabbled with in the past. OK, when I say dabbled, I'd done it a couple of times, found it excruciatingly difficult and sworn never to look at it again! It's on the training plan so I'll be seeing a lot more of it over the next 3 months! 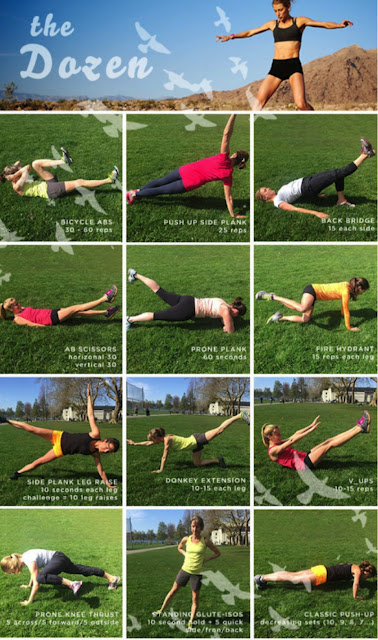 I had a meeting scheduled on Wednesday in Huddersfield which meant a 6 hour round trip up and down the M1.  As normal with the M1, the traffic was a nightmare but I'd managed to download a couple of podcasts the night before which helped with the commute. I'm currently flicking between two; the British Trail Podcast and the British Ultra Running Podcast which I find are both informative and engaging in their own way. As I was fairly late to the 'podcast' party, there's also an extensive back catalogue of episodes to get through so it'll be a while before I run out! I find that its also opens up the country to events further afield that aren't necessarily on the radar; or I've never heard of, which I would consider doing in the future - in particular the Hardmoors series or the Centurion 50/100 miles races.

It was fairly late by the time I got back from Huddersfield and as I'd been stuck behind the wheel for most of the day, I decided to set up my Turbo Trainer a friend had given me in a bid to maintain fitness levels. Fortunately for me, whilst asking for recommendations from fellow cyclists in my running club to purchase a Turbo Trainer, a friend, Helen offered me hers, together with a spare turbo tire which I gratefully accepted. My physio had given me the all clear to use the trainer as long as I set it at zero resistance so it wasn't putting any unnecessary strain on the ankle.

It took about 20 minutes to set up, change the tyre over and off I went. I've never used a turbo trainer before but I can see why people use them over the winter months and set them up with various online training programmes, it seems a good workout if a little on the dull side! I suppose a turbo trainer has its advantages, similar to a treadmill, but in my opinion nothing can match running or riding in the great outdoors, exploring the countryside or rugged terrain we have on offer in the UK. Alas, I can't do that at present so I put the radio on, got my head down and cycled for 40 minutes. With the setting at zero resistance, I tried to keep my Heart Rate down and soon got into a comfortable rhythm. I'd done a bit of reading up online about turbo trainers and a lot of people had mentioned fans - it soon became apparent why! I sweat bucket loads! Even with both office doors open and a steady breeze coming in, within 5 minutes my t-shirt was ringing wet! After 40 minutes, I felt like I'd done a proper workout - even on the easy setting! More pleasingly however, the ankle felt fine. 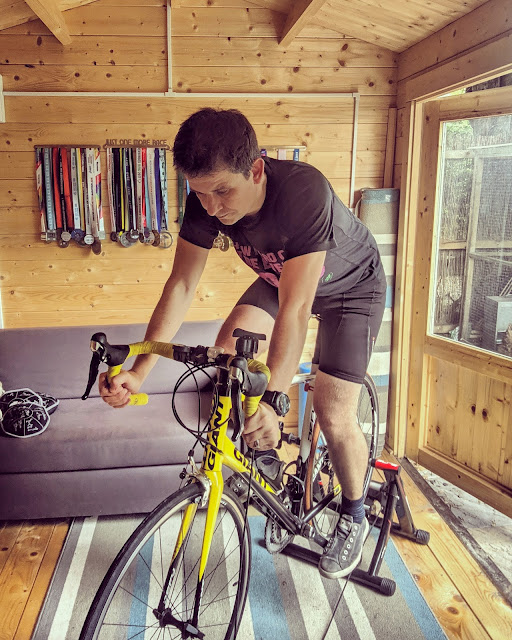 I jumped back on the bike on Thursday and did an hours workout, again conscious of keeping my Heart Rate levels in zones 2 and 3 - with zero to little resistance. I was just as hot, just as sweaty and just as relieved when it was over.
On Saturday I went to Croome Court, a National Trust site in Worcestershire with the family. It was my first visit since completing the Croome Christmas Night Time Canter in December, although it looked completely different in daylight - and so much hillier! The temperature peaked at 31 degrees and although we had a lovely family day out, my ankle had swollen up by the evening. I'm not sure whether this was down to me overdoing it on the turbo trainer, being on my feet all day with the undulating terrain or just down to the heat, but I spent Saturday evening icing the ankle which helped.
Sunday was a lazy garden day but I did manage to fit in another swim session in the afternoon; 2000 metres in 1:12, my furthest swim to date, before being joined by Ruth and the boys for a bit of family splash time. Again, I took it fairly easy and iced my ankle post exercise.
I have a physio appointment scheduled for in the morning and despite the swelling, I am hopeful of some good news on the running front. However, in all honesty, I'm not feeling that confident with how the ankle has been this past week.