A Welcome Return to Running

Monday started with a trip to the physio and in all honesty, I was feeling slightly apprehensive. The swelling had gone down but both the ankle and the lower calf still felt tight. I had the first appointment of the day and was seen pretty much straight away. Again, we went through the obligatory set of Q&A's before the assessment started, manipulating, stretching and massaging the ankle and lower calf. Mobility had improved massively since my last assessment and the physio reassured me that swelling was to be expected after exercise and to continue icing the area as much as possible. I was given a new set of exercises to do which focused on the calf as well as continuing with the basic ankle stretches I was already doing - increasing the reps accordingly. I was also advised to continue with the swimming and cycling, and was given the all clear to start light running in the next 3-4 days! This was music to my ears! Not what I expected to hear but really put my mind at ease and the best possible news to start the week.

Note to self: gentle running on flat terrain, no more than 3 miles at 50% effort and always followed by a rest day. Icing the ankle accordingly post run. 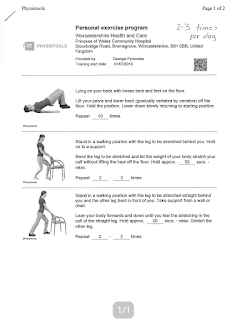 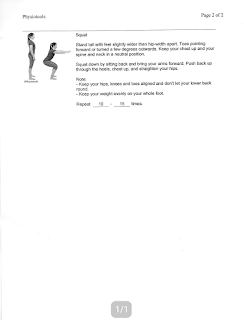 I iced the ankle for 20 minutes when I got back from physio. Superficial bruising had come out in my lower calf and shin, something the physio had warned me about due to the intensity of the session but there was no physical pain or irritation.

On the evening Ruth and I had tickets to see Kelly Jones (of Stereophonic's fame) at the Symphony Hall in Birmingham on his solo tour. Not at all running related but WHAT A GIG and thoroughly deserved a mention.


I set up the turbo trainer on Tuesday evening and did an hour on the bike. The temperature had dropped slightly but it was still warm and muggy. With the turbo set at zero resistance, I got my head down, kept the legs turning and in the end, it was a rather enjoyable workout.

On Wednesday I was fortunate enough to attend the UK Jewellery Awards in London. The plan was to leave the Birmingham office at 1pm, arriving in London for 4pm, allowing enough time to do my dirty dozen exercises, relax, shower and head out for 6.15pm. As it happens, the M1 was a nightmare and parking in London proved to be nigh impossible so we ended up arriving at the hotel just before 6pm. Alas, enough time for a quick shower, change into the tux and off we went. The Dirty Dozen was put on hold.

The awards night was sponsored by Garmin and at the start of the night it was announced that they had kindly donated running watches to 5 lucky people, by randomly placing a winners envelope under their seat. In an excited frenzy, I checked under my seat but unfortunately I wasn't one of the lucky winners - bugger!  However, I did get to meet the legend that is Larry Lamb - from Gavin & Stacey fame amongst others and queued for the all important selfie. Every cloud and all that...


I headed back to Birmingham on Thursday morning tired from the night before - I'm definitely getting too old for all these late nights! Fortunately the traffic was kinder on the way back and I'd managed to convince myself mid journey that I was going to test the ankle out for a quick run that evening.

Although I'd been given the all clear to start with some gentle running, I'd dismissed club run on the evening based on the options being a) a 6 mile social run - too far, or b) a structured intervals/hills reps session - too hard. I also have a tendency to get carried away when running with people and run at the pace of the group rather than at my own pace. I needed to be more disciplined as it was my first run in 4 weeks, plus I was under strict instructions from the physio to take it easy, keep the mileage down whilst listening to my body. I wanted to stay in control. Taking all this into account, I headed to Arrow Valley Country Park in Redditch. Within the park, there is a beautiful lake which is just shy of a mile and a half per lap, the terrain is pretty flat and the car is always accessible if needed. It had gone 7pm so the conditions were near perfect, if a little muggy. 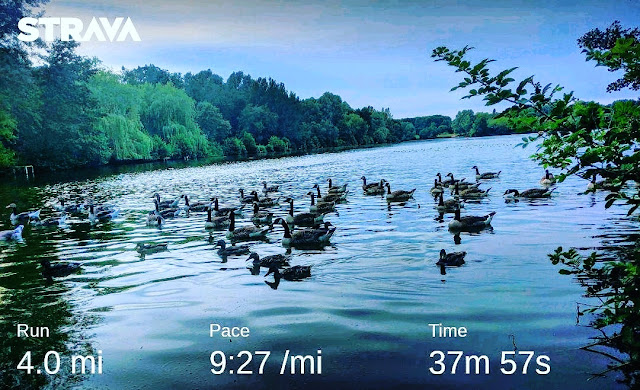 When I first moved to Bromsgrove 6 years ago Arrow Valley was my nearest parkrun. I remember signing up, printing off my barcode and getting my running gear together the night before but never actually made it. I'd been running around the streets of Bromsgrove for a while but always as a solo runner. I hadn't joined a running group at this time so wasn't used to running with others and I suppose I feared the unknown. What if I came last? What if I wasn't welcome? What if I got lost? I remember turning up a few times at 10 am, knowing full well that parkrun had finished but that there would be marshals still clearing up, runners warming down or choosing to do additional laps. I was trying to get an idea of what it was all about and what was to be expected. I'll definitely do next week I'd tell myself. It took several weeks before I plucked up the courage and did my first ever parkrun. I've never looked back since.

Arrow Valley is now my safe place. Whenever I've returned from injury I've always headed for the lake. Each lap is approximately 1.4 miles, it's slightly undulating but with smooth tarmacked paths. It's also very picturesque and traffic free.  There's also a visitor centre and cafe which makes it a nice day out to take the boys for either a family walk, cycle or run. 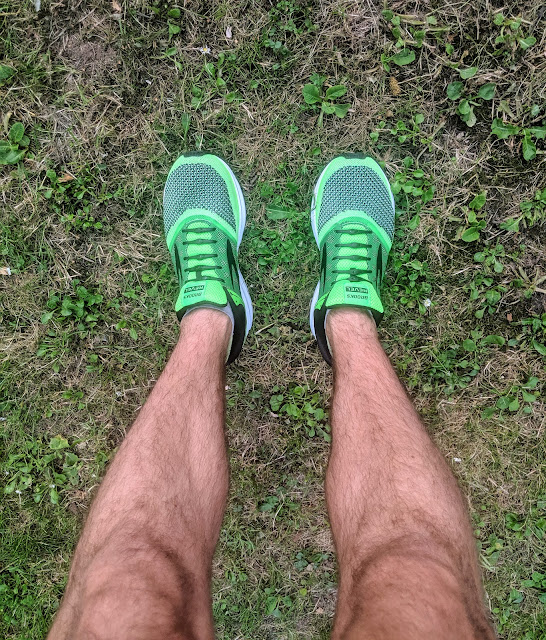 I managed to do 4 miles in total, (an extra mile than planned) but I kept the pace steady and consistent and felt well within my comfort zone, averaging 9.27 minute miles.

The ankle itself never caused me any issues, although with such flat terrain no mobility was needed. The real test will be on trails or on the fells but I'll need to continue building the ankle up before I can start running on those kind of technical terrains. Fitness wise, I felt ok, albeit the pace was well within myself and I didn't really push it. Overall, I was happy with my first run and delighted to get through it niggle free!


I managed to fit in the abandoned 20 minute core routine on Friday, 10 reps each of the 'Dirty Dozen' exercises. It felt slightly easier than last weeks effort but I put that down to me having a more positive outlook on it rather than my core strength improving. My ankle felt fine after yesterdays run and there were no signs of any niggles or reoccurring issues.

Ruth and James were away at Shirejam 2019 on the weekend so it was lovely to spend time with the youngest two. The weather wasn't favorable but we still managed to fit in a cinema trip - Toy Story 4 (it's brilliant btw) on the Saturday, swimming on the Sunday and various other games and activities in between.

I set up the Turbo Trainer on Saturday evening and settled in to watch the Women's World Cup third-place play-off that I had prerecorded from earlier on in the day. I comfortably managed 90 minutes on the bike, my longest turbo ride to date and really enjoyed it. Just a shame about the result!

I'm not sure the wife will approve of the new set-up though, I'm pretty sure I'll be banished to the garden office once she gets back! 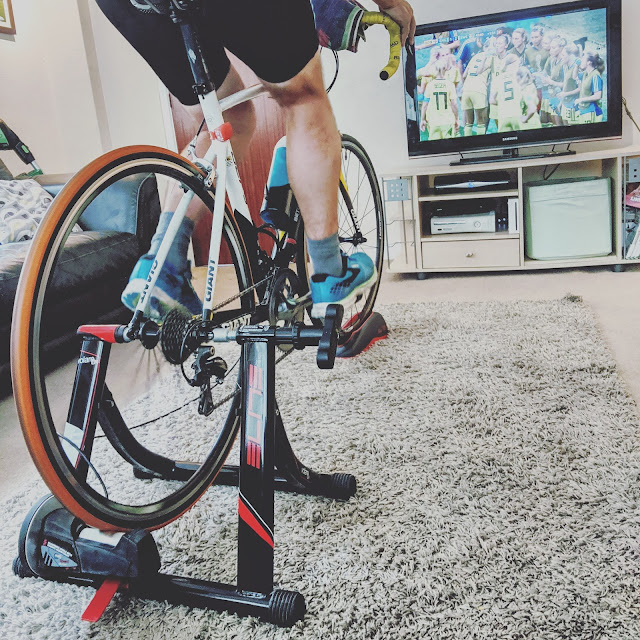 Ruth and James got back earlier than expected on Sunday so I grabbed my running gear and headed back to the lake.

It was cooler than Thursday evening so I picked up the pace slightly and settled in for a 5 mile run. I was keen to add an extra mile on to Thursdays run to show progression, although I'm fully aware this was against the physios orders - I'm my own worse enemy sometimes! Nevertheless, it felt fantastic to be back out on the tarmac and both the ankle and fitness levels felt fine. 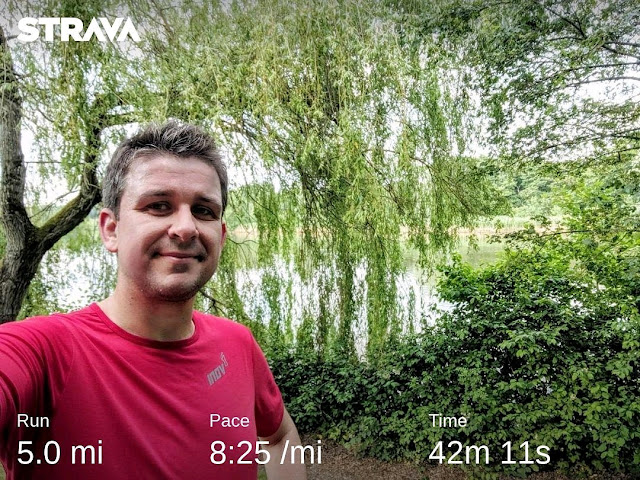 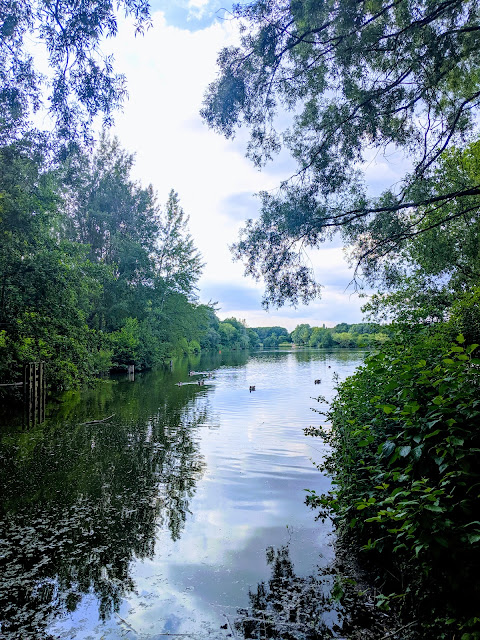