Building up the Miles and a Manchester Legend

I took Monday as a rest day. I was conscious of doing too much too soon and wanted to stick to the schedule as much as possible. It's easy to think that once you've done a couple of runs pain free then you can jump straight back into your normal routine. I know this isn't the case.  I don't need to play catch-up. The physio had made it clear to me that rest days were just as important as the runs themselves and the body needed time to heal and adjust. Both runs last week had gone really well, the last thing I wanted to do was jeopardise them by overexerting myself.

The plan was to stick to the original schedule, just readjusting the mileage in light of the recent injury. I'd run four times a week and rest and stretch for the other three days. I wasn't too concerned with the 'recommended mileage' at this stage. I'd just come off the back of marathon training whereby I'd averaged 30 miles a week since Christmas, so was ahead of plan. I'd also maintained some degree of fitness by cycling and swimming so I wasn't overly concerned that I'd fallen too far behind. From the outset, I felt that the schedule started in August when the weekly mileage hit the 45 mile mark.

My only concern was that I still had the Teesdale Trail 92 miler in the back of my mind which was scheduled for the first week in August. Too soon? I guess we'll see.

I received an email on Tuesday from the organisers of the Manchester Marathon informing me that I had been crowned a Manchester Legend - an accolade given to anyone who has completed 4 or more Manchester Marathons, which I had done consecutively between 2016-2019. As a reward, they were offering a discount off the 2020 entry price, an exclusive Legend t-shirt and your name on the 'Legends Wall' on the website. What an honour! An honour I took with a pinch of salt.

Joking aside, the more I thought about it the more I realised that's it's quite an achievement and I did feel slightly honoured with the recognition. 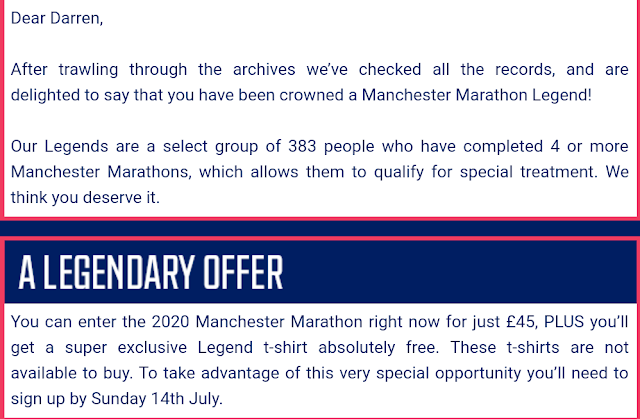 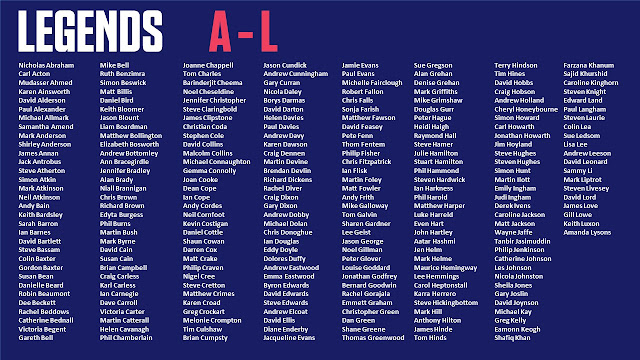 I ran my first 'race' - the Birmingham 10k - 4 years ago and at that time had no inclination or desire to run a marathon. A marathon is not easy, its not just a physical challenge it's a mental challenge. Its not just about the 26.2 miles on the day, it's about the other hundred's of miles you've committed to running in the build up to race day. It's not just your time, it affects the people around you, the early starts, the late nights, the injuries, the milestones, the nutrition, the cost, the commitment, the list is endless.  I respect anyone who has run a marathon and even more so if they've made the conscious decision to do it all over again for a second time... so yes I'll accept the accolade but in hindsight maybe my wife is more deserving of it than me.

Needless to say, I signed up for 2020 and claimed the free t-shirt.

I went for a run on Tuesday evening, a steady 4.5 miles around Bromsgrove. It's a regular route of mine which I often refer to as 'boring miles'. It's hilly, its not very scenic and it's all on busy main roads, but it's handy, door-to-door and helps clock up the weekly miles. In this instance though, it felt great to be back on the tarmac and made me realise how much I'd missed running, even the aforementioned 'boring miles'.

On Wednesday I managed to fit in a late swim; 1200 metres in 48:19. The pool was busier than normal which led to 'poolgate'.  I'm not a fast swimmer and am very much aware of pool etiquette, therefore I tend to stay in one of the slower lanes and allow other swimmers to pass when necessary. It appears that other swimmers aren't so considerate however and choose to ample along in the faster lanes. This was pointed out to a couple of 'gentlemen' and whilst one of them moved to a slower lane, the other point blank refused - even after a couple of lifeguards intervened - much to the annoyance of several swimmers. Oh well, the f'ing and blinding kept me entertained for a short while I guess!

Thursday night was club run. It felt great to be back. I opted for the 10k run and joined up with the 9 - 9.30 minute mile group. The route was lovely, mostly along the canal and the company was great. Solo runs have their place but you can't beat a social, chatty run to tick the miles off on a warm evening.

I took Friday as a rest day but managed to fit in another 'Dirty Dozen' core session - or '20 minutes of hurt' as I'm going to start referring to it as!  I'm not sure why but last weeks session seemed much easier - or maybe I was doing it wrong?!?

Either way, I got it done. No pain, no gain I suppose.

We had tickets to see Stereophonic's in Swansea on Saturday. My sister had kindly offered to have the boys overnight so we'd booked a hotel and agreed to drop them off midday Saturday. Just enough time for parkrun as it happened. 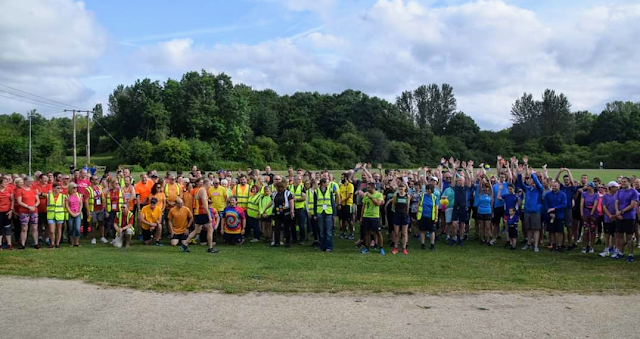 I headed to Arrow Valley for what was to be my 78th parkrun. (My 77th was at the Millennium County, Forest of Marston Vale in Bedfordshire whereby I had PB'd with a time of 20:54). There would be no PB attempt today. It was also Arrow Valley's 7th Birthday event and the official club page had provided the following stats (I'm sure they won't mind me sharing) for all you geeks out there:

I started in the middle of the pack and settled into a comfortable rhythm, overtaking where needed but making sure that I had full visibility of the ground at all times, the last thing I needed was to step in any potholes. I probably went a little too quick all things considered but had a comfortable run, finishing in  22:19 - just 1 second off my Arrow Valley PB. 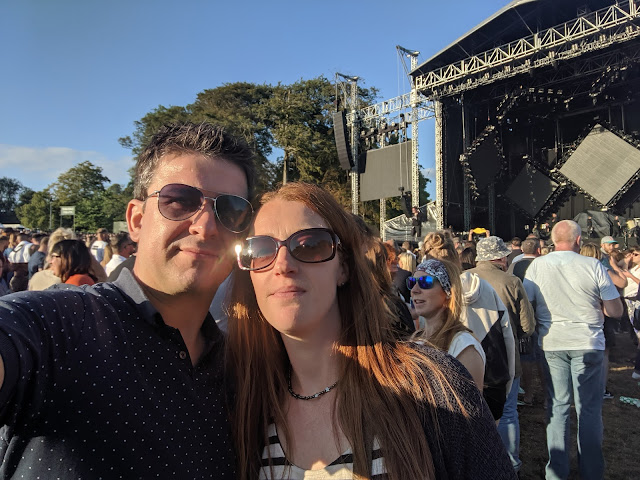 We drove back from Swansea on Sunday morning, picked the boys up from my sisters then headed for an afternoon picnic and a game of rounders, organised by Lickey End Striders in celebration of their 4th anniversary. - (a local running club of which Ruth is now a member).  I knew a few of the guys from the Wild Stiles Trail Running group who were also Lickey End members so it was good to catch up. For the record, I was on the winning team despite some awful batting on my behalf.

I went out for a run on Sunday evening once the kids were in bed. In all honesty, I was knackered from the weekend and probably should have rested but I managed to convince myself to do a slow shuffle around the block, 3 miles in total and with the low sun and great views, it proved the right decision. 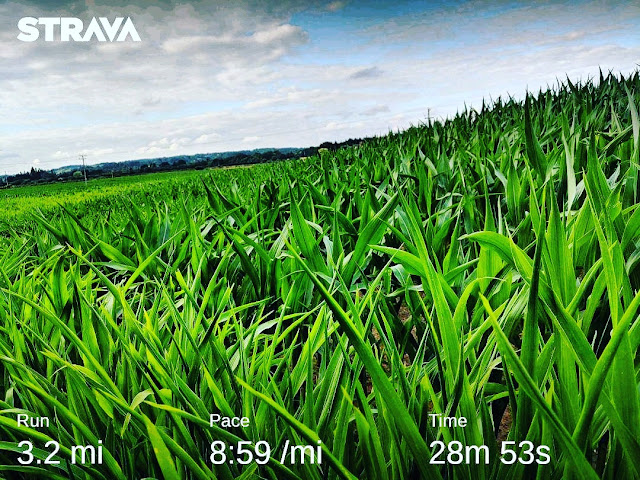 Thankfully Monday is a rest day!
By thebrommierunner at July 14, 2019