Working Away and Weekend Camping

Work took me to East Anglia on Monday. I'd based myself in a quaint little B&B in the historic village of Weston Longville, just outside Norwich. The B&B was situated above a family restaurant and country inn; which would prove to be a real test on the teetotal front!

I work away quite regular, it's not ideal but it's part of the job. I'm often mocked for going on another 'work jolly' but in all honesty, it's quite a lonely existence. When you're visiting the same place two-to-three times a year it soon becomes a bit of a chore and I miss the whirlwind and chaos of home life.  Don't get me wrong, the odd night or two can be bliss, a chance to recharge the batteries, catch up on sleep or dine out in nice restaurants but the reality is, it soon becomes repetitive and loses its appeal.  It also causes issues with childcare. With Ruth working part-time, me not being there brings it's own issues with nursery drop-offs and before and after school club collections. We then become over reliant upon friends and family for support or Ruth having to use up her annual leave.

I'd made the conscious decision on Sunday not to pack my running stuff. I'd only be away for three days and with a busy work diary (Norfolk is a big old county to get around!) I'd planned to rest up on the evenings, recharge the batteries and spend some time with my stretch and exercise programmes. I packed the car on Sunday evening as it would be an early start on Monday.

Needless to say, I woke up Monday morning, threw my running gear into the boot and off I went...

I was out for most of the day but managed to fit in 20 minutes of the 'Dirty Dozen' core strength exercises when I got back before showering and heading down to the bar and restaurant. It had been a long, hot day and I was desperate for a cold pint but I opted for a bottle of San Miguel 0.0% - the non alcoholic alternative - it wasn't nice, this teetotal malarkey wasn't going to be easy.


Tuesday was another long, hot day. Temperatures had peaked at 33 degrees during the day so I'd made the decision to go for a short, steady run early evening once the temperature had dropped slightly. The B&B was surrounded by open countryside and quiet country lanes so I laced up my Brooks (ok, that's technically a lie as I have Hickies - the best invention ever btw) and with no route in mind, just went out to explore.


I managed to do 6.6 miles in total, mostly all on quiet country lanes and where possible, using the tree canopy as shade from the sun. I carried a small bottle of water (I'd left my hydration vest at home) which had gone warm by mile 2 and I'd finished by mile 3 - so not a great advert for running in high temperatures! The last few miles were hard work without any hydration and I was thankful to get back to the B&B, albeit I really enjoyed the run.

It was fairly late by the time I got back from Norwich on Wednesday. I was mindful that I'd agreed to pick the boys up from nursery before 6pm so I left in enough time to allow for the 3.5 hour drive back. As it turns out, it took just over 4.5 hours - the bloody A14. Thankfully I made it in time.

During the commute, I'd been listening to an old episode of the British Trail Running Podcast and in particular to a segment from Jon Steele (ultra runner and race director from the Hardmoors Race Series) who had recently completed The Hill Ultra - a 160 mile run up and down the Shining Tor (one of the highest hills in the Peak District). If that doesn't sound hard enough, you have to complete the course within 48 hours. I won't lie, the segment amazed me; the distance is one thing but running up and down the same hill for 48 hours is on a different level; a true test of mental and physical strength.  Jon was the only finisher that year, the fact that everyone else DNF'd is a true testament to the brutality of the race.

Now, I'm not comparing The Lap Ultra to the Lakes in a Day as I'm fully aware it's in a different league but what they both have in common is hills! The LiaD ultra has over 14,000 feet of elevation and living in the West Midlands, I don't have access to that kind of elevation on my doorstep.  Before my injury, I'd been running a lot up the Malvern Hills - covering about 5,500 ft of elevation over an 18 mile route. What I hadn't been doing though, and something Jon mentioned on the podcast, was practising downhill running which is notoriously bad for beating up your quads. I have twelve weeks (gulp) until race day so in an ideal world I'd be pounding up and down hills as fast as possible but with my recent injury this just isn't practical. Instead, I'm going to have to rely on core strength work and on Jon's recommendation I've added the following Wall Squat to my training plan in a bid to toughen up my quads before race day.


On Thursday I took delivery of new running kit. Technically, it was replacement kit for product that I had returned due to various quality issues, which in fairness was handled really well and store credit given without any issues. I used the store credit to order the following:

Inov-8 Raceshell Full Zip Jacket
A replacement for the Inov-8 Stormshell Jacket which regrettably, (I loved that jacket!) I had to return as my race vest was causing friction marks in the material which was developing into a hole - not great for a waterproof jacket. After an initial inspection, the Raceshell version seems to be made out of slightly thicker material.

Hoka One One Cavu
I've never used Hoka before but I've heard rave reviews and they offer a bit more cushioning and support than my normal Brooks shoes. 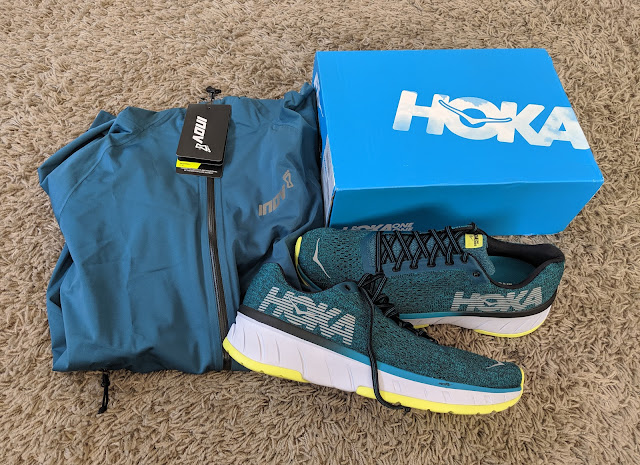 Despite the heat, (it was still 32 degrees at 7pm) I did club run on Thursday evening. Again, I opted for the steady 6 mile route, joining the 9 - 9.5 min mile group and wore my new Hoka's - first impressions are they are extremely comfortable and very lightweight.

We went camping on the weekend to Hopley's in Bewdley, Worcestershire, for what has now turned into an annual event and had a lovely time. I'd taken my running gear with me with the intention of doing Wyre Forest parkrun on the Saturday morning but waking up to a torrential downpour soon put an end to that idea. Nevertheless, we still managed a group walk in the rain and had a great time.

We packed up on Sunday and was off the campsite by 11am.  I'd already decided to go for a short run around Wyre Forest before we headed home. I'd managed to persuade Tom, who's recently returned from injury himself, to join me in a steady 5 mile loop around the forest.

We dropped Ruth and the boys off at the visitor centre then did a steady and enjoyable 5 miler in just over an hour.