I did it! I ran the length of the River Tees, from it's source in Durham to the sea in Redcar. 92 miles! Yes, 92 MILES!  I'm still buzzing. I'm still overwhelmed. I'm still in pain.

My feet are in bits, my toes are bandaged up and my calves and hamstrings hate me. Other than that I'm OK. My ankle stood up to the challenge and so far, I've no signs of any other injuries or niggles which rest, recovery and a bit of TLC won't repair.

Ian fared slightly worse, his knee has been playing up since the run and he's got three giant hogweed burns on his leg and forearm which flared up after 24 hours. I'll spare you the images but he'll be back, stronger and fitter than before, of that I have no doubt. They're just a souvenir of the day, like a tattoo to reminisce about.  I was tempted to message him back with "its all downhill from here..." when he sent me the pictures of his burn marks but I didn't want to tempt fate!

I'd booked Monday off work. I knew I'd be in some discomfort and rest would be in order. I rarely left the sofa, other than to soak in the bath. My boys asked why I was waddling back and forth from the kitchen or going down the stairs on my backside; one day they'll hopefully understand.

I'd weighed myself on Thursday prior to heading up to Darlington. I hobbled back on the scales on Monday to confirm I'd lost 6 lbs over the weekend. According to Strava I'd burnt off 7,137 calories over the three runs.  One thing I never really mentioned in my last blog post was nutrition, mainly because it was so poor! I made sure I'd had breakfast in the morning and took plenty of fluids on board but I hardly ate anything over the three runs. I'd run 30 miles a day on half a Chia Charge bar, a couple of chunks of chocolate and a handful of nuts. That's crazy and not sustainable. It's no wonder I flunked on day 3!  My appetite returned on Sunday evening whilst Ruth drove us home from Redcar and by the end of Monday I'd put back on another 2 lbs - I was craving carbs!

Nutrition is definitely something I need to work on for LiAD.

I returned to work on Tuesday and had an important meeting in the afternoon. I'd recently been selected to join the Committee of the National Association of Jewellers and this was to be my first meeting. It was also the first time I'd have to wear shoes again! I took some Ibuprofen and hoped for the best...

Wednesday was another rest day. Work in the day, then very little else in the evening other than an early night. Very rock n roll. I still wasn't sleeping very well but I was becoming less restless.

Thursday was club run. As much as I was tempted to go, I resisted the urge. My feet were still sore and my calves and hamstrings hadn't quite forgiven me just yet. It ended up being another rest day and another early night.

I had physio on Friday. In my last session he'd given me the all clear to do the Tessdale Way on the premise that a) I'd stop if I felt any discomfort and b) I'd see him for a post run consultation. Well, one out of two's not bad! After the initial assessment, I was given some more strength exercises to do, building up the ankle using balance boards, weights and elastic bands. He then discharged me. Great news!

I ordered the following balance board online for next day delivery so I'll be sure to add it into my weekly routine: 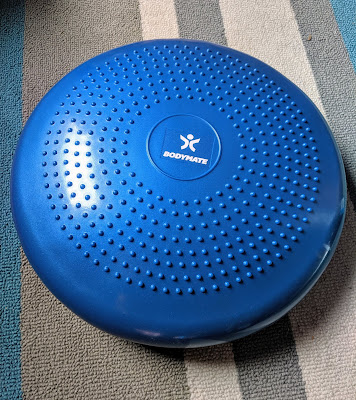 On Sunday I'd opted for a solo run up the Lickey Hills. I kept the pace steady with the intention of treating it as a recovery run, with a bit of elevation thrown in for fun.

Ruth took the boys for a romp around the hills whilst I was running. My calves and hamstrings were screaming at me during the first mile and by mile 2 the heavens had opened. It was torrential. By mile 3 I'd stopped and phoned Ruth who was having a horrid time with the boys; none of whom were dressed appropriately for such a downpour! I cut the run short, went back to the car and picked them up.

I was thankful to cut the run short; more rest needed.