The Isle of Wight Half Marathon 2019

The Isle of Wight Half Marathon is organised by Ryde Harriers and is best described as an undulating, two-lap, scenic race held on hard packed farm tracks and bridleways. It attracts over 250 runners made up from local running clubs and tourists alike. The event is held in August and starts and finishes in Appley Park, Ryde.


Registration was straight forward; either on-line or by downloading a registration form from the Ryde Harriers website. Race numbers and timing chips were collected on the morning of the race and with a start time of 11.30am, best reflects the laid-back, relaxed atmosphere of the event. I was given race number 54 which the marshal joked would be my finishing position - I wish! 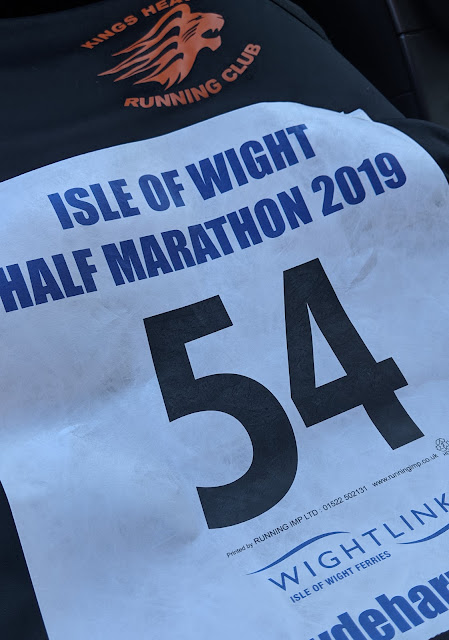 In terms of travel arrangements, Wightlink Ferries offer a 50% concessionary rate for travel upon proof of race entry which, although I never utilised, was a nice touch to encourage a spot of running tourism.

Luckily for me, or well planned if you ask Ruth, it coincided with a two-week family holiday so it would have been rude not to enter, right?

We were based in Shanklin which was a 25 minute drive to the start line. We'd had torrential rain overnight and with very little sleep, woke up to a flooded tent, well ok, I'm being a bit dramatic but we did wake to a flooded porch! The rain continued into the morning but finally stopped as we arrived and parked in Appley Park, some 60 minutes before the race was due to start.

As it was a low key event, parking was straight forward and registration hassle free. I soaked up the atmosphere pre race, chatted to a few locals who joked about how hilly the course was which was the last thing I wanted to hear on already tired legs. I'd read some race reports from last years run so was expecting hills but to hear it first hand was still a little disheartening.

There was a relatively quick race brief from the race organiser (with lots of 'hopes', 'maybe's' and 'should be's in it which made me smile, - as it was a low key event there were limited marshals and they relied on tape for directions) and before I knew it we were off. The sun was now shining and it was getting hot - some contrast to the weather conditions I'd woken up to.

The first mile was predominately downhill after a short uphill section at the start. I started faster than planned and ran with the pace of the group around me, circa 7.30mm pace. By the second mile we hit the first main hill and the start of the first loop. It was a bit of a slog but surprisingly my legs had loosened off and I felt quite good, although in the back of my mind I knew that I'd have to run up the same hill again 5 miles later, hence the nature of looped courses.

As advertised on the website, the terrain was a mixture of road and hard packed farm tracks and as a result I decided to wear my Hoka Ones. Under normal conditions they would have been perfect but due to the amount of rain we'd had overnight the farm tracks had turned into mud tracks and I found myself slipping around as I jumped/dodged the puddles. It was fun but tiring. In hindsight, I may have been better with a pair of lightweight trails or something with a little more grip.

The next 2 miles were undulating but the hills were short enough to power up then recover at the top before stretching your legs out on the downhill sections. By mile 4 we hit the second hill and geez it was tough. Again, I knew in the back of my mind that I'd be running back up it at mile 8! I managed to maintain my pace and although it was taking it out of my legs I still felt strong, averaging 7:35mm's.

Mile 5-8 we again undulating but we were rewarded with some relatively long downhill sections, although mostly on single-file, muddy farm tracks so was difficult to maintain a steady pace. By mile 8 we hit that hill again and this time my legs weren't so responsive! My pace had dropped to 8mm's due to a combination of the hills but also due to the muddy terrain, making it difficult to get any traction.

Miles 9-12 were again undulating and although I was physically tired I managed to maintain 8:20mm pace, despite running into a strong headwind. Much to my surprise however, I found myself overtaking runners, either I was going well or they had got their race strategy wrong. Either way it was giving me a lift but I was desperate for the finish line, my legs had nearly gone.

At mile 12 I turned a blind bend and found myself at the foot of a beast of a hill. In my head the finish line was at sea level so the last mile should have been all downhill. I was wrong. My heart sank! My legs had given up and for a short section I was mentally beaten! I slowly plodded up the hill, one foot in front of the other. About half way up I had slowed to what seemed like walking pace when a lady passed me, obviously saw me struggling and gave me a few words of encouragement. We ran together for a short period which was enough for me to grit my teeth and pick up the pace towards the top of the hill. Once at the top, the road levelled out before a short downhill section into the park and the finish line. I'd like to say I thanked the young lady and ran the last section in together but she left me for dead at the top of the hill! I didn't see her again. Oh well, I was secretly thankful!

I finished in 1:45, some way off my PB but I suppose it's a true reflection in terms of the elevation, terrain and where I am after the Teesdale Way ultra a couple of weeks back. I finished in 81st position out of 276 runners (not quite 54th as predicted) and was 5th in my age category.  I was delighted. I was exhausted! I'd told Ruth I'd be happy with a 2 hour finish so I couldn't even moan when her or the boys weren't there to see me finish - they were still on the beach! We met up shortly after, went for some lunch then spent the afternoon on the beach.

Overall, I'f definitely recommend this race if you're on the island or fancy a bit of tourism which won't break the bank! Although it was a low key event, it was very well organised, friendly, a great route (if you like hills) and the medal was awesome! 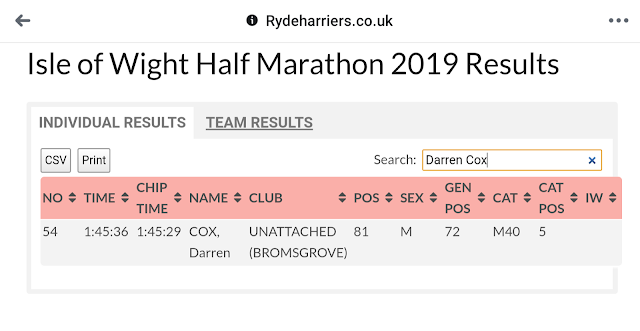 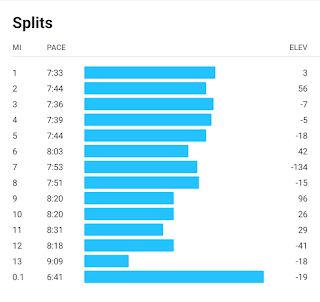 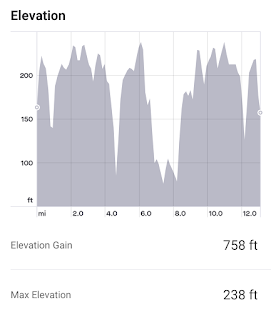