My 4th time running this event and now a firm favourite in the calendar.

The Milton Keynes Winter Half Marathon is a traffic free, scenic and relatively flat route along the canal paths and redways of Milton Keynes. With it's race village at Willen Lake, it boasts an almost festival-like feel to it with live music, food and retail pop-up tents at the start and finish line.

It is promoted as the 'last Half Marathon of the year' and as such, has a friendly parkrun feel about it.

The race itself has also turned into a family affair, with both Ruth and my sister-in-law Elisabeth joining me in recent years. Last years race was to be Ruth's first and only half marathon to date, so running together, supporting each other and crossing the finish line together made for a fantastic day.

The event has grown in numbers over the past couple of years, a victim of it's own success I suppose and sells out way in advance of race day. This year, with 2,500 participants signed-up, the organisers had staggered the start times based on your estimated finish times.

We arrived at the event village by 9:15am. Living in Milton Keynes, Elisabeth had collected our race numbers prior to the event so we turned up ready to run, although registration looked hassle free for those collecting their numbers on the day. One small gripe however was the queue for he portaloo's - it was nearly out of the village! - something I'm sure the organisers will rectify for next year.

Following a short warm-up and race brief, the first wave of runners set off at 10am with the second and third waves following in quick succession. We were in the final wave and were directed into the start pen just before 10:15am. Elisabeth and Ruth had met up with friends from their respective running groups so in total there were five of us who crossed the start line together. 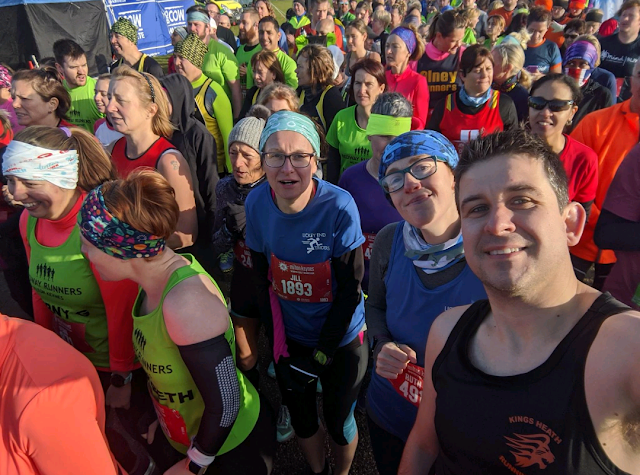 Despite the staggered start, the first mile was congested and with relatively narrow redways, it was difficult to maintain any kind of rhythm. By the second mile the crowds had thinned out and we settled into our own pace. We'd lost Elisabeth by this stage who had got caught in the congestion but I was running with Ruth and Jill who were of similar pace and we soon settled into a comfortable rhythm.

Prior to the event, Ruth had set herself a target of finishing in 2:15 which would be a new PB; taking 7 minutes off last years effort. In all honesty, I felt she was capable of going faster but suffering from the odd niggle and not wanting to put too much pressure on I made a note of the splits and went with it. We were aiming for 10:20/mi splits.

The route itself is a circular run via redways and canal paths. It was relatively well supported and the marshals were on point at every junction, offering out encouragement and guidance if required. Water stations were situated every 3 miles.

The first 6 miles went without incident. Elisabeth had caught us up by mile 4 and was running well as she passed us. We were averaging 10:05/mi splits, so slightly faster than planned, but both Ruth and Jill were comfortable with the pace and were running well within themselves. Conversation was good and the miles were slowly ticking themselves off.

By mile 9 we approached the toughest part of the route with an elevation increase of just over 100 ft between miles 9 and 10; not huge elevation but noticeable on an otherwise flat course. As expected, the pace had fallen somewhat but to their credit, they managed to push on and recorded some of the fastest miles of the day for the remaining 3 miles when everyone around them was slowing down.

We crossed the finish line in 2:11 with both Ruth and Jill recording new PB's with an average of 10:00/mi splits. Elisabeth also achieved a new PB, coming in a minute earlier in 2:10 which was another fantastic achievement and thoroughly well deserved.

From a personal point of view, it's inspiring to be able to share in the achievements of others and I enjoy pacing as much as I enjoy competing for my own records. I recognise that not all races have to be run flat-out to enjoy them and whereas I'm not recording my fastest times, MK half is one of my favourites races of the year.

On crossing the finish line we were handed our medal and finisher's tees - long sleeved to note which was a nice touch. There was water available but no goody bag as such, therefore no fruit or snacks available to the runners (unless purchased from one of the vendors) which was slightly disappointing but didn't tar the event.

We're already discussing next year race and I'm feeling a sub 2 is on the cards for both Ruth and Elisabeth! 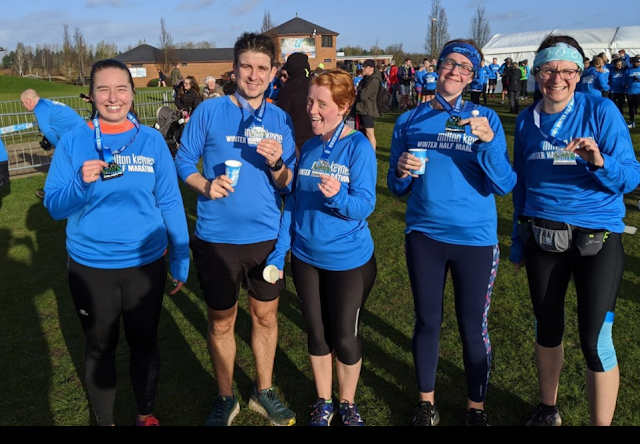 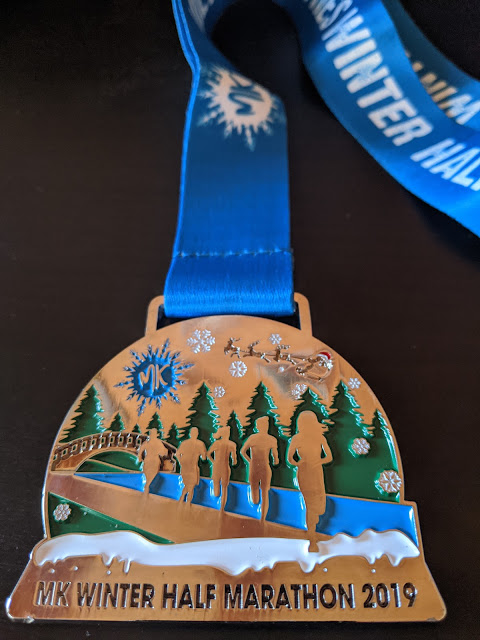