Wow! What a race!

I can't remember the last time I had that much fun on the trails.

This was my second time running this race after securing a last minute place last year. Held in Overton, near Ludlow, Mortimer Forest is just shy of 9 miles and should hold the unofficial record for one of the muddiest trail races in England. From memory, last years event was muddy in places but this years conditions took on a whole new level.

I came into this event on tired legs. I'd run Milton Keynes Half Marathon the weekend prior and I was 15 days into the Advent Run challenge; to run every day in Advent - something I've been doing for the last three years. Why? I have no idea!

I was joined by 3 club mates, Alex, Colin and Rachel and in a bid to save the planet, we'd organised a car share with Alex as the designated driver. This was to be his first time running this event whilst Colin, Rachel and myself had battled though the course last year.

We arrived at registration just after 10am for an 11am start. Registration was straight forward, one queue for those that had pre-registered and another queue for those registering on the day - a nice touch and common for smaller, club-run events.  It was simple and hassle free, just what you want when pre race nerves are setting in.

We headed back to the car, attached our race numbers and changed into our trail shoes. Having either run this event last year or experienced how muddy cross country had been of late, three of us opted for Inov-8 Mudclaws with aggressive lugs for extra traction whilst Colin on the other hand, bless him, had trail shoes with less grip and traction than a road shoe. We were in good spirits and when the conversation turned to whom amongst us was to be the first entry into the 'horizontal running club' we were all in agreement that it was most likely to be Colin - he was in for a very interesting day on the trails.

The pre-race brief was both humorous and engaging with lots of reference to how 'slightly tacky' and 'slightly hilly' the course was in places, which was something of an understatement. We were briefed on some last minute route changes due to fallen trees but the course was well marked out with both tape and marshals pointing you in the right direction.

The first half mile is predominantly uphill on muddy, narrow tracks as you make your way up into the woods. Underfoot, thick mud meant traction was difficult and there were a couple of sections I struggled to stay upright. It was also quite congested at the start with some sections creating bottlenecks, although it soon filtered out as the climb continued.

Once up in the hills, the next mile is a stunning trail out of the woods down into the valley which was a lovely section to run along. It also set you up nicely for what was about to come.

At mile 2 you reach the foot of Poison Bank which is a 400ft, vertical climb on single file, muddy terrain. By this stage, even the elite climbers are forced to walk and you find yourself making your way up the bank in single file. It's tough. It's relentless...but, as it's single file and you're bunched up, there's nowhere else to go but straight ahead and straight up. One foot in front of the other until you reach the top. By about half way up my calves were screaming at me and I'd lost my footing on numerous occasions, managing only to stay upright thanks to the lady behind me stopping my fall. After several apologies and thank you's, we reached the top in one piece.

The next section was another enjoyable trail through some woods before we dropped back down on to the ridge. The descent here was technical, mainly due to the nature of the track but also down to the conditions.  I'm not the best at downhill running, it amazing me how fell runners descend at speed, whether its bravery or stupidity I don't know but it's a skill I'd love to learn. The tracks, although not vertical, were incredibly steep and again were single file and very wet and muddy. As I mostly slid my way down the track, there were echo's of screams and laughter from behind me as other runners tackled the descent in their own way. As fun as it was, I was relieved when I reached the bottom and the route flattened out onto a more runnable trail.

It was on this section where Rachel caught me up and we ran the next couple of miles together. Alex was slightly ahead at this stage and Colin, despite his lack of traction was not too far behind. The next 2 miles were a pleasure to run, the ground underfoot, despite being wet, muddy and slippery were runnable as the trail weaved its way along the ridge with amazing views out toward the Shropshire Hills. Unfortunately, it was also here that Rachel put her nomination in for the first to join the horizontal running club but thankfully, like a trooper she jumped back up, dusted herself off and battled on - no harm done.

At mile 5 we reached the start of the 'Big Dippers' - 3 very steep and very large grassy banks covering the pipes which bring water from Elan Valley in Wales to Birmingham. It's quite difficult to explain the enormity of it but staring out at the three banks is eye opening and with distant runners making there way up and down the three banks the size of the challenge becomes apparent. It's tough! On top of that, the conditions underfoot were wet and muddy which made the descents just as technical and challenging as the climbs back up. Nevertheless, we tentatively made our way down the first bank. At about half way down your momentum takes over and your forced to start running as gravity takes over. It soon becomes apparent that the only way you're stopping yourself is to reach the bottom of the bank or end up on your arse!  It's fun!

At the bottom of the second bank, a runner in front alerted us to two deer who shot out of the woods in front of us and crossed our path. Unfortunately, one of the deer lost its footing and did a full 360 - if the deer can't stay upright then what chance did we have! Thankfully though, it didn't appear to do itself any damage and it shot back up before disappearing back into the woods. It was a surreal experience.

We eventually reached the top of the last bank and were hopeful for some respite. No such luck. The route then joins a track and continues to climb for the next mile to the highest point of the course at over 1100 ft.  I lost Rachel on this section as she managed to maintain a gentle jog whilst I on the other hand, opted for a more leisurely walk. I then got chatting to a couple of like-minded runners and we were in deep conversation as we made our way up the track.

Once at the peak, the next three miles were mainly downhill through forestry trails, hard packed trails and woodland. Feeling fresh after my brief walk, I managed to record some fairly fast miles through this section and made up quite a few places as the runners in front started to tire. There was one last hill to navigate at mile 8 before a final section through the forest to the finish line, cheered home by Alex and Rachel.

I was presented my finishers medal as I crossed the line which was a nice touch. I grabbed some water before joining up with Alex and Rachel, just in time to see a battered and bruised Colin slide his way down the finish straight and cross the line! We'd all finished and were all in one piece. Just.

Colin was sporting a nasty gash on his thigh where he'd fell into a thorn bush (we never laughed, honest!) and his injury and choice of footwear was the main topic of conversation as we made our way back to the car, just as the heavens opened. Once back at the car, Alex and Rachel had prepared tea and soup which was amazing and I can honestly say I've never laughed more post race as we shared our experiences. Great day, great race and even better company! 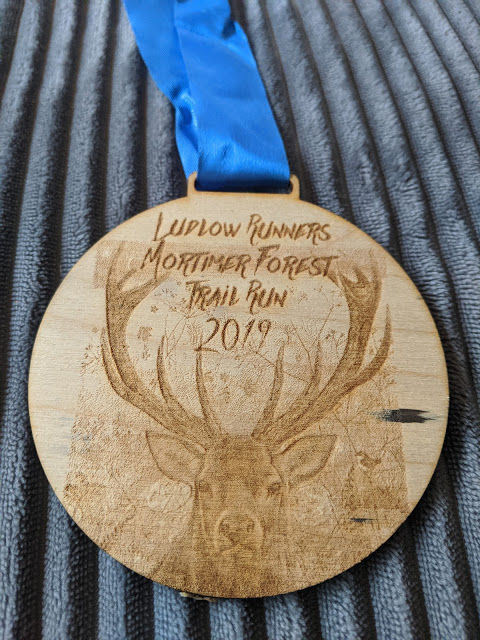