The ultra that almost never was...

Storm Ciara was expected to cause havoc across the UK and with winds of up to 80 mph forecast, there had been Amber weather warnings in place prior to 'race day'.

Not technically a 'race', a group of fellow runners had come up with the idea of running from Birmingham to Worcester along the canal covering a distance of 30 miles. For some, it would be their first ultramarathon and billed as a social run to support and encourage anyone who wanted to run further than the standard 26.2 miles.

Logistically, it wasn't ideal. Starting in Birmingham and ending in Worcester, we were relying on taxi's to get us to and from the start/finish as it was to be a 6.30 am start.

In the build up to the run, there had been growing concerns about the impending storm so the decision was made to reschedule the run to a later date - probably the right decision in hindsight for some but if the truth be told, I was a little disappointed.

I then got a message from a runner within the group saying that they were going to run the canals anyway and asked me to join them.

The run was back on.

Rather than have the logistical hassle of a linear run from Birmingham to Worcester, we decided to do a circular run starting and finishing in Bromsgrove and heading out towards Worcester. It worked out at just over 30 miles but was easier logistically.

We met up at 6.30 am outside the Ewe and Lamb public house where I was introduced to Adam, Natasha and Jon. I knew Neil from the Wild Stiles running group.

Head torches on, the five of us joined the canal and headed towards Worcester.

The conditions weren't ideal, we were running into a headwind which at times was bringing us to a halt. The terrain was a mixture of hard packed trails, mud and tarmac - but mostly mud! Although blistery, it wasn't cold but we were greeted with the occasionally downpour which just made the terrain even muddier - the type of mud you either skate across or nearly lose your footwear in. It was tiring work but the conversation was flowing and we were all in good spirits.

Reaching Worcester, we were at the turnaround point and after a brief toilet and refreshment stop at McDonald's, we left the canal behind us and joined the trails along the River Severn.

This was a tough section. The terrain was wet and muddy and traction was difficult. I'd opted for my Inov-8 Rocklites which are great on hard parked trail but pretty useless in mud. They are extremely comfortable though and although my Mudclaws would have been better suited for these sections, running 30 miles in them would have impacted on my feet. Sometimes, comfort over practicality wins every time!

It was during this section that we stumbled upon a trail race that was taking place in and around Worcester. Luckily for us, we were running in the opposite direction to the oncoming runners so could stand aside and let them through on the single file trails, gates or stiles - after all, they were in a race, we weren't! It distracted us from the hurt and discomfort we were starting to endure as the conditions were now starting to take their toll.

Heading back to Bromsgrove, we now had Storm Ciara behind us and even though the trails were hard work we welcomed the gale force winds against our back. The miles were starting to tick themselves off and the group were still in high spirits, if a little exhausted. 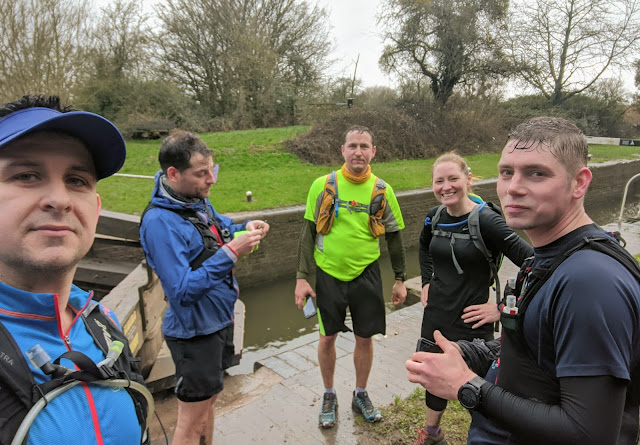 With the exception of Neil and myself, no-one in the group had run further than 22 miles before so passing that milestone gave the group another welcome boost.

By mile 27 we rejoined the canal for the last few miles into Bromsgrove. The pace had slowed slightly - as to be expected for that kind of distance - but the group was still together and we pushed towards the finish.

An awesome day out on the trails with great company.

Massive respect to Adam, Natasha and Jon for completing their first ultra. I doubt they'll do a harder 30 miles than in those conditions.

Storm Ciara, in all honestly didn't cause us too many issues. Reading reports of trees being uprooted and public transport cancelling services was a bit eye opening but I think by leaving early we missed the worst of it. The conditions underfoot was the real issue. Canal and bridleways in winter are bad enough but running into a headwind in wet, muddy conditions is hard work, especially over that kind of distance and there is no respite.

Kudos indeed to them. 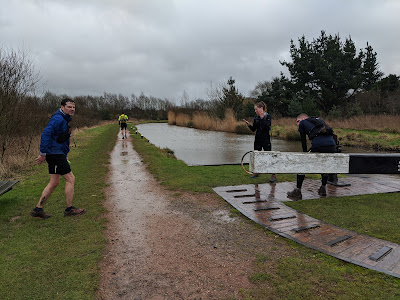 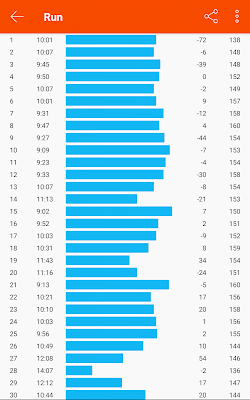 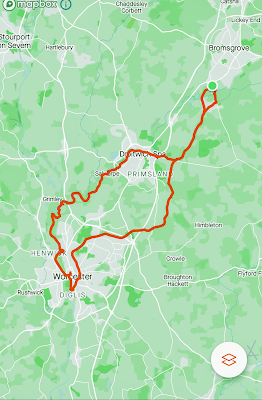