Icing on the Cake Marathon 2020

The first race in the calendar and one I very much look forward to. The Icing on the Cake' marathon is set in the Shropshire Hills and covers just shy of 5,500 ft of climb in and around Carding Mill Valley and the Long Mynd.

Last years event was cancelled due to snow so I'd been keeping a keen eye on the weather forecast in the build up to race day.

I came into this race well prepared. I'd been leading groups of my local running club up the Malvern Hills and had run the same route of 18 miles, covering over 5000 ft consecutively for the last three weekends. I felt strong, fitness levels seemed ok, albeit slightly heavy in the legs.

I'd organised to car share with my good friend Tom, who was down for the HM. Ruth and the boys had planned to drive down later and meet me at the finish line - always a welcome boost!

We arrived in time for registration and to meet up with club mates for that all important pre-race photo. We were greeted with clear blue skies but high winds - winds which were forecast to get stronger throughout the day. Everyone seemed in good spirits and it was good to be joined on the trails by a large contingent from KHRC. 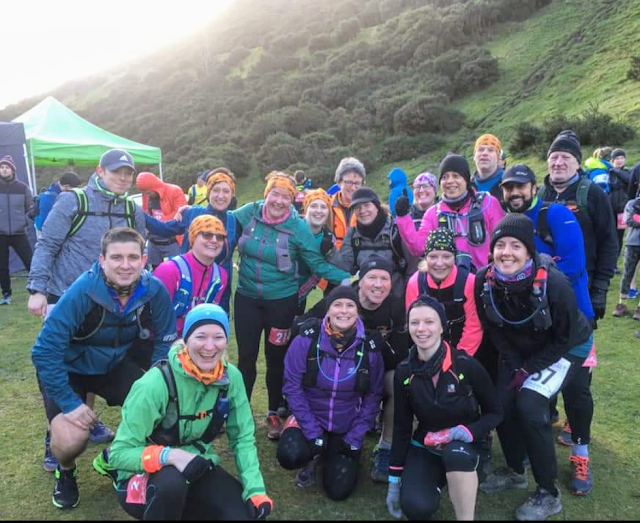 The race started at 9am and its a short run down the valley before you reach the foot of the first hill. Being single file, everyone had filtered into their own pace group and I found myself quite close to the front - probably not ideal for a 2 lap strategy! Thus, rather than walking up the hill I was forced to run in fear of holding people up behind me. No bother, my legs felt loose and although steep, it wasn't particular long. Reaching the top, the trail levelled out and I managed to get my breath back and settle into a more manageable rhythm.

The route profile is basically 2 main peaks, covering 1,600 ft of elevation each with over 6 miles of climb between them. It's tough. The declines are technical and just as tough, although there are a couple of miles of runnable section. It's not a fast course! 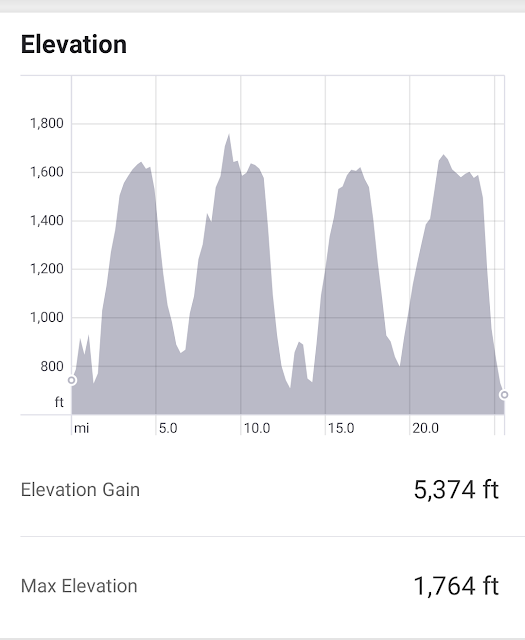 The first 4 miles went well. I'd adopted (like everyone else around me) a run/walk strategy - running the flat sections and power walking up the hills. I was overtaken by Rachel and we had a brief chat before she pushed on ahead. I'd considered pushing it slightly and staying with her but as I was down for the marathon, and she was doing the HM, I thought better of it! Kudos to her though, she disappeared into the distance at some pace!

The next couple of miles are runnable and a mixture of grassy trails and roads. I'd got myself into a small group and we ran this section together at a fairly fast pace - in hindsight, probably too fast! I later found out they were all in for the half marathon which reinforced my concerns.

At mile 6 you reach the farm which indicates the start of the next uphill slog - climbing 1,700 ft over 3 miles. Personally, I don't find this section as challenging as the first climb and the views are amazing! The wind had started to pick up at this stage and were a sign of things to come. 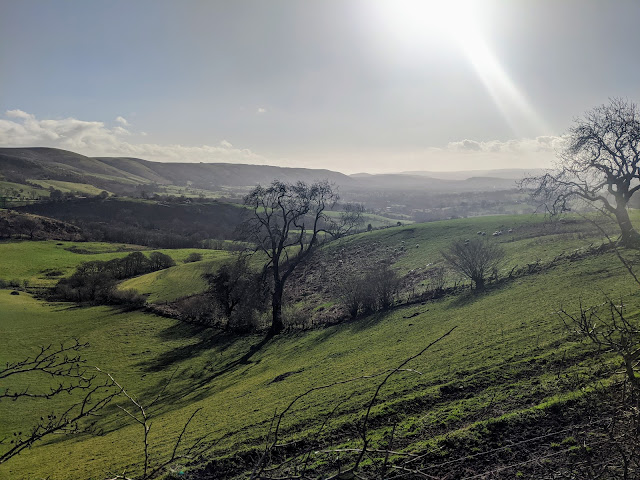 Once you hit the summit, you're off the grassy trails and join the gravel tracks and road, zigzagging your way back to the start. The final descent, a rather spectacular technical, rocky path down through the valley to the start. It was on this section where I was joined by Matt and we ran the last couple of miles together which felt great to have some company - if only Matt was down for the second lap I thought to myself!

I grabbed some gels and bars off Matt (that was a godsend as I'd left my nutrition in Tom's car - schoolboy error!) before heading out on my own for the second lap.

Looking back though the results, I'd completed the first lap in 2:27 - much faster than my previous efforts on this course and I was feeling strong.

I maintained my race strategy as I started lap 2, running the flats and hiking the hills. At the bottom of the valley I'd noticed the winds had picked up but we were sheltered by hills either side. I continued to push on. 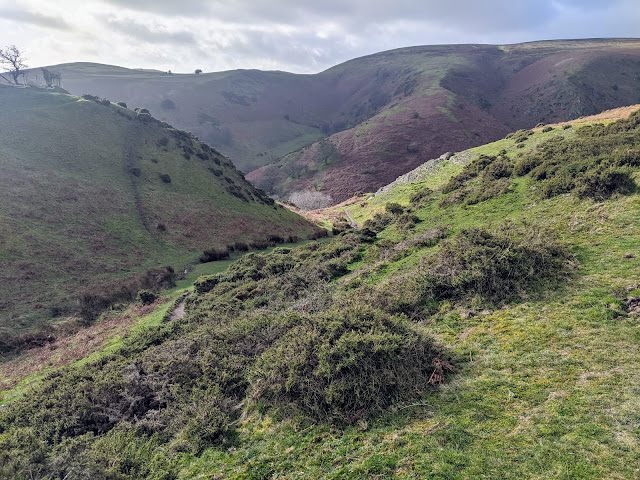 About half way up the trail opens up and with no shelter from the winds, you're open to the elements! It was blowing a gale and we were hiking into a headwind. It was literally head down and do your best to keep moving forward. I'm not a small guy and it felt like a losing battle, for every step forward you were blown backwards. What a different a couple of hours makes! I pushed on and eventually made it to the Marshall located just before the descent. (kudos to her; Karen who I later hooked up with on Instagram - she had to endure that wind for hours and was the real winner here!). Stopping for a brief chat, she informed me that the winds were up to 49 mph on the tops - I've never run into a headwind that strong before.

Dropping off the hills, the next section is runnable and I managed to claw back some time I'd lost on the tops. There was still a strong wind but being in the valley we were sheltered from it, which was a relief.

It didn't seem long before I reached the farm and the start of the last climb. I continued moving forward. My calves and hamstrings felt tight by now and had taken a beating from the elevation but I was still enjoying it. Despite the high winds, the sky was clear and the views were amazing. I try and appreciate what's around me when I'm on the trails, it's so different to road running where you're either clock watching or staring at the tarmac.

I overtook a couple of runners on this section as I hiked up the hills. Once at the summit, the hard work is behind you and you have a couple of miles to stretch the legs and enjoy the views for the final time, before descending down into the valley and the finish line.

Running past the visitor centre I was greeted by Ruth and the boys which felt amazing - and was joined by James, my oldest son who ran the last hundred metres or so with me to the finish line.

Regardless of finish times or places, it was another amazing day on the hills and I'll no doubt be back next year to enjoy those views again! 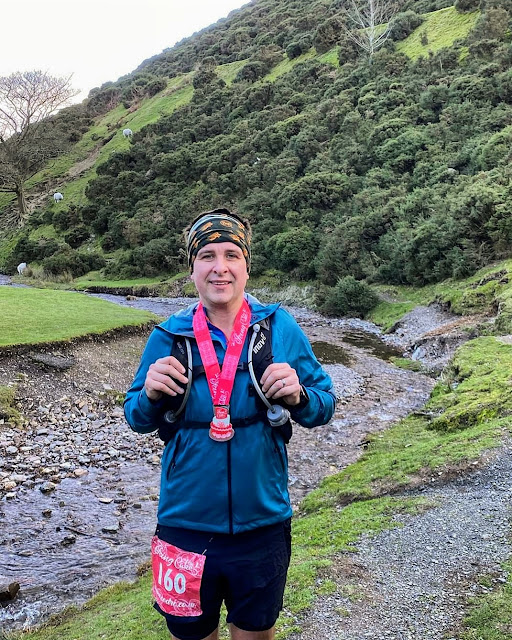 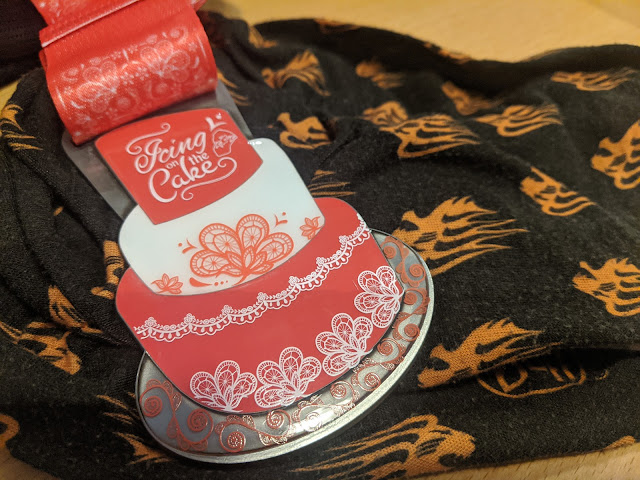 Email ThisBlogThis!Share to TwitterShare to FacebookShare to Pinterest
Labels: half marathon, hills, how hard can it be, icing on the cake, marathon, run, Runner, running, shropshire hills, trail